Jan van Vlierden and I were not complete strangers towards each other when we met. We've known each other for some years thanks to our blogging activities. I knew thus in advance Jan doesn't have too much energy. When he goes outside, he must plan his activities carefully. Also with regard to this interview. 'I've been busy with it for days already', he tells me when we meet at train station Soestdijk, May 2nd. Which is not far from Soest, the place he has been living for all his life. 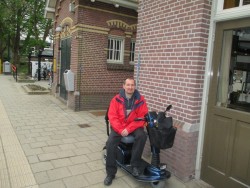 Jan is 52, married and has a connective tissue disorder. His bone density is very low because of that. 'From the age of 40, I was tired continuously. I had no idea what was the matter. I thought I had been working too hard. At that time, I was working part time at a market research agency. Besides, I led a very active life. I played in a band for instance. The doctors were not able to find anything. My wife works in the health care. One day, she let me participate in a bone research. During that bone scan it turned out my bone density was spectacularly low. The doctor said "I have the skeleton of someone of 90 years old". I had never been aware of this. During my youth, I broke my bones eight times, but since the age of 15 I had not had any problems anymore.

'The first years after the diagnosis, I tried to live my life the way I had been used to. I started practicing fitness and went to the physiotherapist hoping to improve my physical condition. It was the contrary. My body got too overloaded and I did not take enough time to recover. At a certain moment, I only worked two hours a day for two mornings. I was being transported to and from my work. In total I worked there for 16 years and had several functions. At the end, my only responsibility left was judging the quality of the phone calls made.'

It was clear things could not continu this way. Jan has been out of work completely since six years. This asked for many adjustments to the situation. 'I've had periods in which I was depressed. I thought I had a good life before I got my disability. In one second you loose it. At some point of time you must accept it. I switched the button. Fortunately, there are enough things I can occupy myself with. I do the chores as well as possible and I draw cartoons on the computer. Everything does happen at a much slower pace than I was used to do them. In the past, it took me one day to draw a cartoon, now it takes me one week. After having done something, I need to rest a lot. To give you an example: when this interview is done, I go home, eat a sandwich and go to bed. The next couple of days, I will still feel I've been out today.

'It's difficult for my family as well. Most of the time I skip going to birthday parties. One of the main problems is I live in an apartment three floors high without an elevator. We've considered to move to a more suitable apartment. It wouldn't improve our situation really. The town of Soest is willing to help finding such an apartment, as long as our general housing doesn't improve. I do live in a green environment now. Should we move, we will end up in a flat, a much worse environment. I don't want to expose my family to a less pleasant environment for my own sake only. As long as we manage to live in our current home ...'

Too much red tape

Because of his disability, Jan got into a red tape which didn't make him happy. 'I've been treated correctly most of the time, but sometimes it takes a lot of time to get things done. One has to be patient and things are often decided without consulting the person who's involved. To give you an example: we decided to ask for a mobility scooter. Such a thing must be loaded constantly. The first mobility scooter I was offered, was too big to stall where I live. The health consultant proposed to put it in a separate garage box. The community didn't agree with that, which I could understand. Things kept on turning in the red tape mill until I proposed myself that a smaller version of that mobility scooter which can be put in my apartment would do as well. Finally, I got my mobility scooter. It had taken more than one year.

'Another example is my request for a social benefit with regard to me being unable to work anymore. I had been working only 20 hours a week before I got my disability. My main purpose in life has never been to earn much money. Seen from an objective point of view, this has not been smart. 70% of a salary for 20 hours of work a week isn't much. My request for the social benefit became a nightmare. I had to come to talk with consultants about my chances of getting back to work constantly, for the benefit is intended to get people back into the working process. Those consultants didn't understand my situation. You can't blame everything on your disability, one told me. The last medical advisor I saw was very suspicious and said I could still work for 20 hours a week easily. To my big surprise, the labour expert judged I wasn't able to work at all anymore. That was the end of the story. When I threw a glance into my dossier, I noticed the medical advisor hadn't taken any action to study my case. She had only be looking at the decision of her predecessor.'

The current Dutch government intends to save drastically in the costs of health care. Also people with a disability will notice that. Jan doesn't agree with this policy. 'In general I don't find it a good time for disabled people. Fortunately, I don't have any costs myself, but those who have to take expensive medicines and need pschychiatrical care must pay 550 euro of their own. These people are the ones who don't have that much money in general. It's a strange measure. You don't cut on people who need health care. The decision maklers don't realise the effect of their measures.'

Glad with creative choices
Jan could have done better financially than he's doing now, should he have given more attention to his working career instead of his creative side. Nevertheless, he doesn't regret his choices made. 'If I have to give an advice about how to cope with your disability, I of course say you have to listen to your body well. But, I most of all have an advice for healthy people as well. One often hears that people postpone their creative ambitions until later, when they expect to have more time for them. I'm glad I didn't do that. My story shows that later could be too late. I lived my creative dreams and put aside a possible working career to realize it. Despite the financial consequences it had, I'm glad about that.'

Jan's creativity can be followed in a new cartoon on his blog every Sunday (http://stripmanprikbord.blogspot.com) and can be seen and heard in the YouTube he chose. It's an own piece of work. Unfortunately, in Dutch only.

More information about Osteogenesis Imperfecta can be found on http://www.oife.org/index.php