'I'm not wishing to be cured from Asperger Syndrom'

Maja Kristine Johansson, 22, was diagnosed with Asperger Syndrom two years ago after undergoing some tests voluntarily, because she had a notion herself of being autistic. After the tests indeed proved she had Asperger, she felt relieved. It explained why she always had been different from other kids and youngsters and it gave her the inspiration to focus on the thing she's really good at: painting. 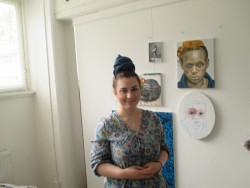 First of all: what is Asperger Syndrom exactly? Wikipedia describes it as follows: 'Asperger Syndrom (AS) or Asperger Disorder (AD) is an autism spectrum disorder that is characterized by significant difficulties in social interaction, alongside restricted and repetitive patterns of behavior and interests. It differs from other autism spectrum disorders by its relative preservation of linguistic and cognitive development. Although not required for diagnosis, physical clumsiness and atypical (peculiar, odd) use of language are frequently reported. The syndrome is named after the Austrian pediatrician Hans Asperger who, in 1944, studied and described children in his practice who lacked non-verbal communication skills, demonstrated limited empathy with their peers and were physically clumsy.'

Maja got the idea of having AS herself after seeing a movie in which some of the characters had autism. The reason why she did tests to find out was a depression two years ago. 'The tests showed I do have AS. Not severly, but I feel and notice it in every day life. I've always been different. I can draw back in myself completely. I never had eye contact with other persons. I learned to do that later. I'm shy and sensitive to light and smells. I feel uncomfortable among large crowds of people. That's why I seldom visit parties. I rarely drink alcohol, compared to other Danish youngsters. Many autistic people can say rude things. Therefore I always think first before I say something or make a post on the internet. Another characteristic of my disability is that I want to check everything and I am always too early at appointments (which she was for this interview as well, JP).

At school, Maja was sometimes bullied because of her different behaviour. One teacher always told her to 'look her in the eyes'. Something people with autism find difficult to do. 'I wonder how things would have developed if it was already discovered in kindergarden I had Asperger. I assume the bullying would have been less. The world is full of evil and rude people. Fortunately, there are also many kind people.

'Danish youngsters can be rude to children who are not like them. For instance, they talk very negatively about kids with Down Syndrom. They don't want to be seen with their fellow disabled students. To change this behaviour there must come proper education about disabilities. Not in a mocking way. Teachers should have to be educated about ADHD and Asperger so they can recognize it.

Don't you think people are sometimes given the diagnosis ADHD or autism too fast?

'Yes, there's a truth in that. Many parents don't know how to raise kids. Some people have traits of Asperger. In the end, all people can be put into boxes. If you're not bothered by it in daily life, you should just leave it. Otherwise, you should have a look at it.

'Should the bullying have succeeded, I would have dug a hole in the ground to get in. But I managed to overcome the bullies. Now I know I'm different from other people, I feel an inner peace. Should it be possible to cure Asperger, I don't think I would wish to be cured. I can try to become more social, but there's no pressure anymore. I'm neither seeking contact with other people who have Asperger too at the moment, but I can imagine that would be practical one day. I'm not looking for a boyfriend. A guy has to come to me. I don't think I will have children of my own later. I never was interested in baby dolls. To me, giving birth to a child seems unnatural. Like something from outer space. My mother will be disappointed she will not be a grandmother.'

How did your parents react to the diagnosis?

'My mother was with me when the end result was discussed. She accepts I'm different, but keeps on telling me I must be more easy going. I think both my parents do have Asperger too. I see traits in them that are symptoms of it. Asperger is inheritable. But, I'm saying this as a self-taught psychologist.'

Through the diagnosis and the acceptance of it Maja discovered her talent for painting. 'I had always been good in painting, but since I know I have Asperger I fully concentrate on it for I know this is what I want to do and can do best. I would like to study at the Arts Academy in Copenhagen, but there are many more candidates than places available. One must be lucky to be picked out. Until now, I didn't have that luck. I must work more on my portfolio. (update: August 2013, Maja mailed me she has been accepted to study at the Academy of Fine Arts in Gothenburg, Sweden)

'What I'm really good in is painting portraits. I compare myself to Chuck Close, an American artist who has got autism too. My teacher at the arts school told me to start painting portraits. It was difficult in the beginning. I see details, but not the whole composition of a face. I have a special way at looking at colours. When I'm on my way to somewhere I play mindgames about how to mix colours. People with autism also have a big fantasy. That's very useful in my work. I was told I paint like someone who has been doing it for already a long time. I only paint when I'm in the mood for it. Otherwise, nothing good comes out of it. It would be nice to be recognized for my art. I can't live of it yet. All my paintings I made until now have been gifts.'

Maja doesn't think she's suited for a normal job. She therefore fully concentrates on her painting activities. Fortunately, the Danish social welfare system gives her the opportunity to do so. 'If I indeed don't succeed in getting a job and as long as I can't earn money from my art, I'm entitled to pre-pension, when I'm 30 years or older. The people in the council of Bagsvaerd, a suburb of Copenhagen where I live with my mother, know about my disability and can arrange that for me. My father has pre-pension too and he manages to live of it. Asperger is a recognized disability in Denmark. If I'm admitted at the Arts Academy, I can get a a disability benefit to pay my study. If I can't study in Copenhagen, but for instance would be admitted in Amsterdam or Goteburg, I would move there.

'A disability only limits you in case there are no adjustments. Denmark is a good country for disabled people to live in. There are parking spots for disabled people. The trains are adjusted. They are not excluded. This is not to say nothing has to be done anymore. Not all stores do have ramps for instance. The problem is government is cutting down its expenses.'

In the way Maja behaved towards me, I recognized her autism. Nevertheless, the interview went very well. We talked for more than an hour and at moments she could not be stopped. She had prepared herself by reading some of my earlier interviews in this series, so she knew what kind of questions to expect. She fully succeeded in this 'examination'.

There was a time, Maja dreamt of becoming a professional singer. That wasn't the 'real Maja'. However, she loves to listen to music and has a good ear for it. Her musical choice is 'White flag' by Dido, especially because of the melody.