Once, all intellectually disabled will have same rights as non-disabled 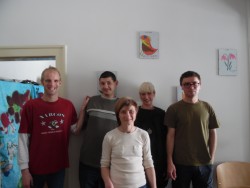 The Association has a broad range of activities: it creates projects, organizes a yearly conference, it has contact with politicians and other influential people. It also publishes a magazine, The Voice of Self-Advocates, four times a year. The contacts with politicians sometimes prove to be useful. People with an intellectual disability in Croatia now have the right to vote thanks to the work of the Association which head office is in Zagreb. In 15 other Croatian cities it supports and works together with other self-advocacy groups which are part of parental organizations or service providers. The Association also supports the formation of self-advocacy groups in former institutions where people with an intellectual disability used to live and which are now in the process of transformation in the service providers. We will come to talk about those institutions later on.
The most important topic the Association is dealing with at the moment is the deprivation of legal capacity many Croatians with an intellectual or psycho-social disability still face. Of the approximately 19,000 Croatians who belong to the target group some 16,000 are fully deprived of their legal capacity. This means they are not allowed to decide for themselves, have no right to work, can't manage their properties etc. The Association strives that all 19,000 will get equal rights like the non-disabled have. Legal capacity in Croatia is regulated by the Family Act which they are trying to have changed. Croatia also ratified the UN Convention on the Rights of Persons with Disabilities which says in Article 12 that all persons have the right to be treated equally before the law. This means they should have their legal capacity and support in making decisions.
The government is actually closing the institutions many intellectually disabled are living in. The Association welcomes the closure, but stresses those people need to be kept supported when they are going to live in the community. In many cases independence and freedom for persons with disabilities is not respected and old ways of thinking, characteristic for institutions, are still present in support services. If these things do not change, there is a real danger that there will be many small institutions where people will not have their independence. An inclusive society means that all of its members have their independence and have the same opportunities from the starting point.

The majority of the Croatians regard people with an intellectual disability as incapable to do anything. The members of the Association of course don’t agree with this view. The fact that they fight for their own rights together proves the contrary and they are very proud of their work and the results that come out of it. Tomislav gives an example of how a different approach can be realized. ‘I do judo. At the judo club I am considered as being one of them without any distinction. What the rest of society thinks of me? I don’t care at all about that. It makes me angry they only see my disability.’

From protection to independency

Senada was born in Tuzla, a town in Bosnia-Herzegovina, in 1976. At the age of one, her mother noticed something was wrong with Senada. For instance, she did not move from her place at all where her mother had left her. She also had motoric problems. Senada was sent to Banja Luka, another Bosnian town, for recovery every three months. This lasted until the age of seven. Then, her school career finally started. When she had finished elementary school she went to secondary school in Zagreb. The family had moved to the Croatian island Hvar meanwhile, since her father had found work there. After secondary school Senada returned to Hvar for another three years. Because of family problems, she had to move to Zagreb once again. She started living in an institution run by a religious charity called Caritas. One could say it was at this point in her life her current activism concerning equal rights for intellectually disabled people started.

‘I didn’t like life in the institution at all. I lived separated from other people. One wasn’t allowed to go out. The food was bad. Each day was the same. When there was work to do, it was badly paid. To end, there was no privacy. I lived in the institution seven and a half years. Then I moved to a supported housing program to live there for another five years. Now, I live on my own and I work with the Association. I sometimes need help with living on my own, but in general everything is going fine.

’When I do need any help, it most of the time has to do with accessibility matters. I also have physical problems and the public transport is not always accessible for me. Bus drivers don’t always wait for me and I don’t dare to run, afraid of falling. The accessibility of information is something else I have difficulty with. I recently joined a climbing club which is located in another part of the city. It was very hard for me to find out how to get there. Maps are too difficult to read. Therefore, I don’t know how to get from A to B and need help to figure that out. I think the city of Zagreb could do more with regard to accessibility matters, with equal regard to information, transport and buildings.'
Active at an European level

Senada her job with the Association is quite expanded. She does educational projects, participates in public events, writes for the magazine and so on. But, she doesn’t fight for the rights of intellectually disabled people in her home country only. Senada is also active at an European level. She’s the vice-president of Inclusion Europe, an European umbrella organization that unites organizations of people with an intellectual disability and their families and advocates for their rights. Furthermore, she’s also the president of EPSA which stands for European Platform of Self Advocates. EPSA informs the public about the rights and needs of people with an intellectual disability and is part of Inclusion Europe. EPSA exists since 2000.

‘I attend conferences and meet politicians. I tell them about my own experiences. I talk about the implementation of laws, I educate organizations from other countries. I see that many countries are struggling with the legal rights of intellectually disabled people. Each country has its own approach. For instance, there are no institutions in Norway. What about special education, marriage, the right to vote, work? A protective working place doesn’t equal normal employment. Neither does special education equal a normal school. The UN Convention for the Rights of People with Disabilities gives me hope for the future. Things are changing. People start to look differently to intellectually disabled. I like to, for example, compare it to the struggle for women’s rights. One hundred years ago, women were not allowed to vote either. It may take another 100 years before we have the same rights like everyone else. Some generations at least, but it will happen in the end.’

Looking at her own near future, Senada doesn’t have big plans or it must be she has started writing a book. ‘It’s titled A fight of a person with a disability and is partially autobiographical. For the rest, I live from day to day and don’t make plans. What happens, happens.’

Senada loves pop and rock music. Favourite bands are Bon Jovi and U2. Her favourite female singer is Adele.