My stay in London was not a big success seen from an accessibility point of view as far as the hotel chosen was concerned. I wished I had come into contact with Mik Scarlet before booking the hotel. Mik is an accessibility expert, something he rolled into somehow. He was a musician and BBC television personality first. Remarkable careers too seen the fact he has been sitting in a wheelchair since the age of 15. 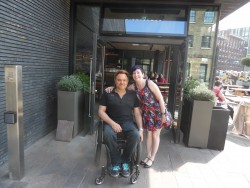 Mik was born with a rare form of cancer which the doctors discovered when he was six weeks old. ‘The doctors told my parents I would not make it to five. I was lucky they were trying new medicines at the time and I was the youngest test person. All test persons survived. Whether the medicine would show side-effects wasn’t known then. It did. I limbed with my right leg. For the rest I was able to walk until the age of 15, when my spine broke as another side-effect. Since then, I have been moving around in a wheelchair.

‘My parents fought for me. They moved to another area of London, so I could go to a school that accepted me. They told me I was better, tougher than other kids. After I broke my spine, I lost my friends. I thought it was all over until I started to make music. That was my rescue.’

‘No posters of musician in wheelchair’

Mik became a professional musician. His first band was called Freak UK and got quite successful. They toured with Gary Numan (well-known of his hits Cars and Are friends electric, JP). Mik performed on stage in his wheelchair which didn’t raise strange remarks. But, when it came to signing a record deal his disability proved to be a problem for the record company. They argued that ‘girls don’t put posters of a musician in a wheelchair above their bed’.


End of his music career? No, Mik started another band: Eroticis which was a dance act. ‘It became even bigger than Freak UK. I was enjoying my life at that time and didn’t think much about the future. I thought I would not make it to 50. The tours turned out to be deciding how the rest of my life developed. Already during the Freak UK period I met Diane in a nightclub. This was the 80’s. We married in 2005. Once I was on tour with Eroticis, a computer crashed. I managed to fix it on stage, meanwhile talking to the audience. Coincidentally someone of ITV was present who got impressed by my gig and invited me to come to talk about an own television program. That would be my second career.’

Accessibility and disability on television

We are talking about the late 80’s/early 90’s when Mik appears on British television for the first time. ‘My first program had to do with green issues. Recycling and that kind of stuff. From 1990 – 1992 I presented a children’s program. My wheelchair was clearly visible in it. No one raised any question. Compared to 2016, the situation concerning the acceptance of disability in public life was better then. Recently, there has been a discussion about a female television personality who has only got one arm. Parents started asking questions about how they must explain this to their kids.’

Mik also made programs about accessible travelling. Here’s an example of his item about visiting Amsterdam in a wheelchair.


Ill fate seemed to strike again in 1999. Mik got a car accident right after he had signed a new contract with the BBC. He broke his back again. Since then, his body consists of metal from his hips to his chest. But, he also experienced something positive. ‘After the accident and the operation I was again able to feel my feet when I put them on the ground. I had not been able to do that 25 years. In theory, I could maybe even walk again. It would take three operations and years of recovery. I decided not to do that. It would take too much of me compared to the eventual advantage of being able to walk again. This decision  caused a storm of media attention and confusion with my doctors. My television career was over at that time and I had to make a switch again. I decided to become an accessibility advisor. Later on, I picked up my television work and the music too.’

‘Accessibility is not only about money’

Mik made his first steps on the path of advising others about accessibility at the age of 17. ‘I went to the cinema, but couldn’t get in. I contacted the manager and told him how he could his cinema make accessible. During my music career, I performed in many nightclubs which were not accessible either. I told them what to do about it. This millennium I started Mik Scarlet Access, it’s a one person company with which I aim to reach the smaller businesses. Once the small businesses get accessible, the bigger ones will have to follow. An example of a project I’ve done is the wider Kings Cross redevelopment, including the square where we have this interview in The Lighterman pub.’

After the interview, Mik goes to the wheelchair toilet and returns amazed: ‘The loo isn’t accessible enough! I had difficulty in getting a good grip to lift myself up.’ Advising about the accessibility of the buildings in the wider Kings Cross area was not his task. 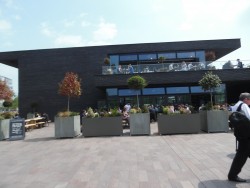 The Lighterman pub is wheelchair accessible
through the entrance at the left corner. It’s
a pity of the wheelchair toilet

‘What makes business hire me for advice is that I am sitting in a wheelchair myself and that I am an expert in accessibility. I know how the lack of accessibility impacts my life and that of other people with a disability. When I am at work, I think of other categories of disabled people too. I am active for the Chair of Equity’s Deaf and Disabled Members Committee. I do not only advice about physical accessibility, but also about helpful ways to assist people with a disability that don’t cost anything. For instance, people with a learning disability can be perfectly helped by being friendly and keeping the information provided simple. Many businesses try to avoid being accessible by saying "we don’t see many disabled clients”. Of course not! If you are not accessible, they won’t come! I currently offer a special training, among others for Network Rail. I teach their employees how to be as helpful and accessible as possible.

‘Social media have changed the way people with a disability can work together in reaching a better accessibility. Its influence is big. In the traditional media Channel 4 pays a lot of attention to the subject.’

London could learn from other cities

How I did experience London myself, can be read elsewhere on this site. How does Mik judge the accessibility of London and other places in Great-Britain? ‘Central London is getting better with regard to accessibility, but it still isn’t Barcelona or Berlin. For instance, all tubes, trams and buses are accessible in Barcelona. That’s not the case here. One has to do his research before coming to London. I recently went to Norfolk. To my surprise, it was very much accessible. Liverpool is doing well too.  Bristol on the other hand not. Accessibility is a responsibility of each separate council. Therefore, there are great differences in this country. Great-Britain has signed the UN Convention on Human Rights for People with a Disability, but the government focuses on our own Equality Law which is less outspoken when it comes to this subject. All public bodies must legally prove what they do to improve accessibility. There lie opportunities for my own business. Imagine, even hospitals don’t always meet the required standards!’

For those who like to know more about Mik’s accessibility work: take a look on his site.

Mik has passed the age of 50 and is still going strong. His most favourite song deals with the end of life nonetheless. It is I die you die by Gary Numan.