'Accessibility of information is a quality standard

Making digital information more accessible for people with a disability through participation in international projects with products and services developed for and tested by the target group. That’s the philosophy of Swedish company Funka. It began as a portal for Swedish with a disability in the 90’s. In the year 2000, Funka turned into a privately owned company. The name means ‘it works’. Nowadays, Funka has offices in Stockholm, Oslo and Madrid. In the latter city, I spoke with the Responsible for International Affairs, José Angel Martinez Usero. 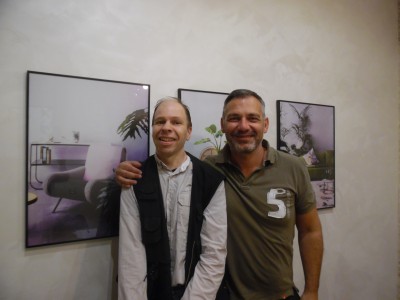 First and for all José wishes to make a clear distinction between his position within Funka, a company that is active within the European Union, and his own personal opinion about the situation for Spanish with a disability as far as accessible information and accessibility in general are concerned. So, we start with an introduction of the company and its European wide activities in which José plays an important role.

The Funka offices in Stockholm and Oslo are mainly occupied with the development and marketing of accessibility services and accessible ICT. These are used in projects which aim to make a website or other (digital) information source more accessible. Funka is also active in giving advise with regard to physical accessibility and built environment. The Madrid office, which started in 2013, concentrates on the innovation part by participating in European projects that deal with accessible information transfer. Projects on either the political level or in co-operation with for instance universities or organisations for people with a disability. It’s a small office with only two employees, but they do a lot of work. José mentions three projects the Spanish office  for EU projects has been participating in:

Funka’s focus is not only on ICT matters. They also look at content, design, documents and other signs that are being used to share information.  In order to give reliable advise the target group can profit from, Funka tests its services and products first by calling on users with a disability. The company disposes of a large database of disabled people they can ask to join a test. Funka develops for all possible disabilities. Lately, the focus has especially come on cognitive disabilities and learning problems.  By testing with different user levels, the company can create services and software that is usable for a maximum number of users.

Of course, not every European country has the same level when it comes to accessibility of (digital) information yet. In general one can say the situation in Europe is improving, José notices. ‘The Scandinavian countries and Germany are on top of the list. The information technology  they use is more sophisticated and thus the accessibility will be higher. But, it’s not always a disadvantage to start from a lower position. Websites in the Eastern European countries, for instance, are more static which has the advantage they can be turned into accessible websites easier. The main problem in those countries is that they started working around accessibility in a later stadium and don’t have the contacts to improve quickly.’

In case you wish to have an exact idea of the products and services offered by  Funka and their vision on accessibility, visit their website.

‘Situation in Spain has much improved’

Before his current job with Funka, José worked for ONCE, the national Spanish Foundation for Cooperation and the Social Inclusion of the Disabled. He left the organisation in 2012. From his past job and his current job José can thus perfectly judge the situation of Spanish people with a disability. According to José, that situation has improved much the past 20 years.

‘In Madrid, the facilities are good. There’s accessible public transport. There are opportunities to get a job. Also in other great Spanish cities, the situation has improved. Outside the big cities, the accessibility will be less. Spain has always been in the European top ten with regard to overall accessibility.

‘Looking at the accessibility of digital information: the Spanish government has done great efforts for improving public websites. The economic crisis did cause a slowing in this process. Digital accessibility was not the most important issue during those years. However, the government has agreed that accessibility of information is a quality standard in itself and is actively promoting this point of view. A detailed legal framework has been created which pushes user organisations to make work of accessible information transfer. The main thing that is missing is the knowledge needed within companies in order to make their information transfer accessible for all users. There exists a knowledge gap in ICT companies when it comes to accessibility matters. One of the reasons of that gap is the fact they don’t have a special accessibility department and don’t think out of a holistic concept. Now, when they say their products are accessible and it turns out these products are not fully (or not at all) while the government relies on them for their own information supply, you do have a double problem. The Madrid office of Funka is not active on the Spanish market in the sense of selling our services and products. Of course, we do have contacts with universities and organisations for the disabled in the country to let them participate in our projects. I do have contact with them every day.’

The most ideal scenario would of course be that all digital information services and products are 100% accessible. Will that ever become reality? José: ‘If that ever happens, Funka will not exist any longer. It’s the objective of the company, for sure. It has to start within the companies and organisations themselves. Funka delivers them the necessary tools.’

Funka is one of the founding members of the International Association of Accessibility Professionals (IAAP). Its mission is to define, promote and improve the accessibility profession globally through networking, education and certification in order to enable the creation of accessible products, content and services.

Until we’ve reached complete digital accessibility, there is still a lot of work to do for Funka in general and José in particular. Music can be a nice stimulation in this. He especially likes Spanish music of the 80’s. Bands like Mecano and Fangoria. You might know Mecano from their hit Hijo de la luna. That’s not José’s favourite song, so I chose something of Fangoria, Retorciendo Palabras.