Disability used as a source of inspiration

This is a double interview with Anna Bergholtz and Lars Lindberg. They've known each other for some ten years and both are active with regard to improving the position of, and knowledge about, Swedish disabled. But, from a different background and with a different goal/approach. 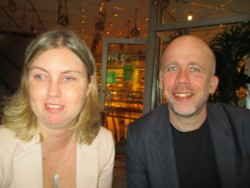 Anna is a journalist and has been completely blind since the age of 24, because of rheumatoid arthritis that does affect her mobility and her sight. Besides journalist work, she does many other things as well. She writes childrens books, holds inspirational lectures and leads debates. To mention only a few things. Lars used to work for Swedish government on disability issues. That's how he and Anna came into contact. He was supervising her when she worked at the ministry for Social Welfare. Since autumn last year, he has been active as an independent consultant with regard to disabled people and human rights. Lars has a hearing impairment since he fell on his head from a table at the age of six. Something happened with his hearing by that fall. He's able to hear something again now thanks to a cochlear implant and a microphone.

Both Lars and Anna regard their disability as part of their identity and they use their disability to improve things for their fellow disabled people. They have plans to work together on a new educational project this year in which they will comply each other. In their own words 'Lars is the man who knows everything about facts and statistics. Anna concentrates on sharing her own experiences and thoughts about her disability'. To start with the facts. How is the situation for disabled people in Stockholm and Sweden in general?

Lars: 'The Swedish policy for disabled people has always had a strong connection to social welfare, but there have been focuses on other rights as well. The last years, the situation has become more difficult. Disability policy isn't highly placed on the political agenda and there have been several cuts in the social programmes eg. personal assistance. But, compared to other countries like for instance the UK the situation in Sweden is better. With regard to the hearing impaired, the accessibility in public transport has been improved with written information, but in shops and companies there still is a lot to be done. Also hotels and conference rooms still don't have an induction loop.'

Anna: 'Compared to wheelchair users, there are less adjustments for the visual impaired in Stockholm. I also don't have access to every place with my eye-seeing dog Duncan. I must leave him at home then. That's discrimination in my opinion. It's not against the law, but I hope there will be a law that says it's discrimation soon. Just like it is the case in Norway.'

Lars is very connected to the question of human rights of disabled people. He even wrote a book about the history of the Swedish policy with regard to disability policy and the general practice in Europe. The book wasn't meant to draw a real conclusion, but it could be that Swedish policy with regard to disabled people was weak and fragmantised until 2000. He worked on an action plan himself to improve this. Lars: 'Swedish discrimination policy is now mainly focused on the job market. Many disabled feel discriminated when they search for a job. At the ministry, there have been these problems as well at first. Currently, Swedish disabled demonstrate every Thursday to ask for attention for other disability related subjects as well. Sweden signed the UN-convention on human rights for the disabled. In practice, the government hasn't implied all the rules of it yet.'

I tell them about a case I heard some time ago. It's about a deaf Dutch girl who wished to study journalism, but who was refused to enter the study because of her disability. Both Anna and Lars react indignantly. Anna thinks 'such a thing could not happen in Sweden. There's in fact a deaf journalist working in Sweden'. Lars says the girl 'should put an official complaint'. Anna had never expected this to happen in a country as The Netherlands.

Disability used as an inspirational source

Anna is pretty famous in Sweden. She has been on radio and television to talk about her disability. 'I use it as an advantage. As a journalist, I look diffently at some subjects, because I'm visual impaired. I ask other questions as well. I have power in writing things down, so people read about them. Nevertheless, it's a pity one is being pushed into a box directly. She's the blind journalist that talks about being blind. I want to talk about other subjects as well.

'My speeches are inspiring lectures to motivate people. A disability is normally regarded as something bad. I show my public that it can be used positively as well. Telling stories has always been the red thread in my life. As a kid I loved to write when I was lying in hospital. As a debate leader, I teach people not to be afraid to do things differently. One can learn a lot when seeing me move on stage. Fortunately, I can use technical devices, but I'm still nervous every time I lead a debate. I know people will think it's difficult for me or that I'm not able to do it at all.'

What wondered me very much was that she was the first blind movie critic in Sweden. How do you watch a movie? 'Many people underestimate the powerful function of the senses. The hearing for instance. I choose movies which have a lot of dialogue in it. By listening very carefully I sometimes discover things other critics didn't see, but most of the time my reviews can be compared with those of the critics who see. It has already been some time I last did this. It was news in many newspapers. I know there's a blind movie critic in the USA as well.'

Both Lars and Anna do have new writing plans of their own besides their co-operation in the educational project.

Lars: 'I'm thinking about a second book. This one must deal with medical ethics with regard to the disabled. There are so many new developments. Just suppose we will all be walking around with an iphone implanted in our head one day.'

Anna: 'I'm thinking of writing a movie script of my first childrens book. The book is about a dog that becomes an eye-seeing dog. I got the idea from all the questions children asked me about Duncan. Other books are always in my mind. The contents of my next childrens book isn't worked out clearly yet. It must be about being different and that it can be an advantage. That book is meant for smaller kids. I also want to do radio and television again. I want to do so many different things as well. I try to limit myself to do only a few things at a time. Having one thing ended, I then turn to the next thing on my list. My rheumatoid arthritis makes that I don't always have enough energy. During the mornings, my muscles are often stiff. The pain is the worst aspect. I find it worse than the blindness.'
Who wants to know more about Anna's lectures, also given in English, is invited to visit her site: www.Annasvision.se