Having dinner in a special Rome restaurant

This article about Locanda dei Girasoli was written in 2018. You can follow the actual developments of the restaurant on their site which is mentioned at the end of the article.

Also people with an intellectual disability like to literally be part of society, for instance by working. In The Netherlands and Belgium there are many initiatives to realise this for them. They are mostly organised by specific organisations for the target group. Many of these initiatives concern work in the hotel and catering industry. In Rome, I found a similar initiative in this industry in the private sector: Locanda dei Girasoli. 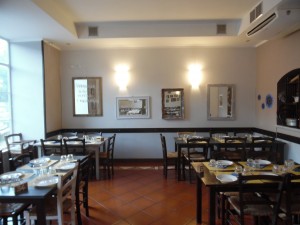 Locanda dei Girasoli is an Italian restaurant where people with Down Syndrome work. It is located at Via dei Sulpici 117/H. It is not that easy to reach the restaurant. One can take metro line A, but be prepared for a long walk on bad pavement. Via dei Sulpici is a long street, but not in a straight line. Sometimes, the name of the street changes into another one. It’s not difficult to get lost … Thus: going to the restaurant by car would make it much more easy. 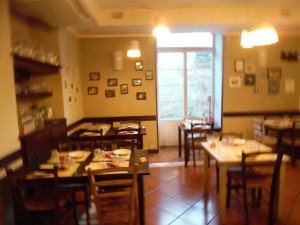 The restaurant employs in total ten persons with an intellectual disability. Nine have Down Syndrome, one has autism. It concerns eight boys and two women. The women help with the dishes and positioning the forks, spoons and knives. The boys are serving the guests. Francesco, for instance, takes care of serving the wine.

The employees regard each other as one big family. They like the atmosphere of their working space. Of course, they also work to earn some money. The restaurant pays all the employees a fair income. The people with Down Syndrome are not being subsidised by government support and all have a fixed contract.

During the weekends, the restaurant is most visited. On Saturdays, the restaurant is often fully booked with around 120 guests. The guests are used to the special staff and treat them normally. Among the non-disabled personnel are Linda and Ariana. They keep an eye on the employees to make sure everything is going well. 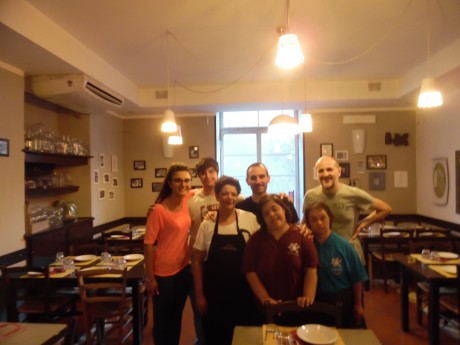 Part of the staff, among them Ariana (orange sweater) and Linda (apron)

Should you ever be in Rome and like to have a look yourself (and of course enjoy the menu): the restaurant is open from 19:30 every day. Website (only in Italian): http://www.lalocandadeigirasoli.it/